Why Five Spokes in the Seeking Balance Wheel 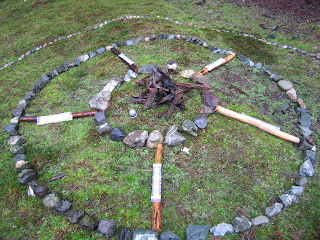 Why Five Spokes and where the spaces can take you in Sacred Creation
Kryon explains this far better than I can so I have extracted two excerpts for your review. Trying to explain multidimensionality with linear words sometimes just turns what I am trying to say into more linear BS. Originals can be found at Kryon.com; click to any page after home and go down to the bottom right and click on audios to find the free mp3s delineated by year.

Retrieved from Kryon Channel 3 RTL day one 17
It started early. And what was taught was based around a shape. And from children to adults the shape remained the same. It was complex because what was within the shape, was then evolved.

Let me explain. First and most complex, the shape. A wheel, a circle with spokes to the center. The spokes to the center were numbered 5. 5 spokes to the center around the wheel.  My partner go slow. I’m going to give these thing to you, You’ve never heard them before. And I’m going to give you visualizations that you will then enhance upon, using also the Akasha of the 2 who sit next to you. Yet how this looked, what happened and how it felt like. The teacher, the Lemurian teacher who was Pleiadian always would not be at the center. Would always walk around the circle when teaching. So there never was an exhaulted place. It started with the children. If you were a Lemurian and so many of you were, you got this as a child.

The circle had a name, but let me explain first, why 5? The name and the number go together. And it’s not numerology. This is long before, way before numerology. The human beings saw the energies of the numbers and developed systems. This was raw. It was 5. 5 spokes to the center. The wheel had a name. Seeking Balance was the name of the wheel. And they called it a wheel, although it was then put before them on the ground for them to study. Circle on the ground. With 5 spokes from that which circled it to the center. Why 5?

Dear Ones, 5 is not that which you’d expect. Almost everything in nature is balanced with pairs. The push pull energy of the galaxy. The yin and the yang. The light and the dark. The laws of physics. The strong and the weak. Everything is paired up but not 5. Seeking Balance was the subject of this sacred wheel.  And the spokes all had names and they would be explained to the children, to the adults; Why 5? And now we get into what the Pleiadians wanted humanity to understand and know from the beginning.

Magnetic fields. This won’t take long, don’t check out if you don’t like science. The basics of magnetics at the very prime information; super simple. Physicists forgive me for this. Super simple. An atom which has too many electrons versus an atom that doesn’t have enough, creates a plus and a minus pole as they try to connect with one another to balance themselves. This is a magnetic field. This is the bi-polarness of a magnet. The plus and the minus. We have told you since we started giving you physics that Magnetism is one of the only things in standard physics that begs to be changed. And that there are ways the relationship between these parts; these atoms with too many and these atoms with too few. If you can figure out how to manipulate the many to the few and the few to the many, you change the relationship to the parts; you manipulate the balance of physics and you can do anything.

This wheel is 5, for it begs for balance even within the shape of the teaching of the wheel. Five. It creates 6 spaces 5 spokes create 6 spaces. Even before the numerology the 6 was known. That’s a balance number. The teacher, always one that was the Star Mother, beautiful, lovely to behold for it was always in benevolence and compassion. The children loved the Mothers.

About the spaces
Retrieved from Channel 6 RTL 17 Day 1
Now we’re going to give you some information that we didn’t give you before. It’s not that important. It’s just that we want you to visualize this for yourself, and perhaps even remember what the wheel might have looked like. The circle on the ground, in 2 dimensions. What it really might have looked like. Then slowly we are going to count the spaces. The wheel part, the circle part was thick, fat. It represented one third of the distance from the outer to the fulcrum, the middle, one third. The spokes, 5 of them represented one third to the middle. And the hub was the remaining third.

Now if you draw this you will see that the hub really was quite large. So anything that was put in the middle of it would have been quite small compared to the space in the hub. For those of you that took the time to draw a circle and put 5 spokes on it, the last channel I gave may have seemed puzzling. You see there is only 5 spaces between the spokes. Let’s talk about the sixth space. Not before we remind you of the sacred geometry, but those of you that understand this will see. You’re used to geometry being in straight lines. The 5 spaces if you color them in represent a very, very strange kind of triangle. You see the bottom of the triangle is curved. You have 5 triangles that are unusual because the bottom of them is not a straight line. The definition of any curve is an infinite number of straight lines. There is a message even within the spaces shape, 5 of them. Where is the 6th space? The answer is the hub. That’s number 6. Now to a child learning it they’d never see that. They’re not taught that. The women are taught that. When the gender teaching has split the girls began to study the spaces and they begin to be identified. That which is invisible, as I’ve said before, that which is difficult to understand. The reason the women get it is because they are going to need it to teach the sacredness they are going to hold of advancement of a relationship to the center hub.
Even the children are taught the center is god. The great Central Sun is God. And the great circle; that place around it, is life. It’s their life. And from the beginning they see something. First of all it touches all the spokes and all the spokes touch the middle. They also see that there is not beginning or ending of life. Therefore no matter how long they study it they always see the same thing. It never ends. Eventually teaching of that even which is just the circumference, even that which is of life, is so sacred and it says this, no beginning, no end to the essence of you.

I want to talk again about yet again, the 6th space, the hub. The hub is beginning to show itself. Those spokes they go both ways. And again you have a teaching. There is no directionality on any of the spokes. You see there is no proprietariness, they all connect to the center and the center connects to the outside. Remove one and the system is weak. So the hub is not the end-all. The hub is not the power center it is simply the center.