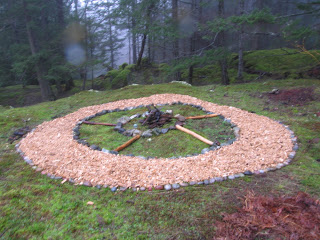 The teaching tool that was brought to earth by the Pleiadian Star Mothers was called the Seeking Balance Wheel. It is a simple geometric wheel whose title and purpose evolves during the lifelong educational process of demonstrating the truth of who you are as a Divine Creator. It is used for all age levels of education. Toy wheels are used by youngsters under the age of seven. They can hardly wait for their ritual when they can be taught by the very tall Star Mothers. Boys and girls are taught together between the ages of 7 and 13. Then, as menses usually start at age 13, the boys and girls are taught separately, as their roles in life differ.

This is another ceremony. Up until this time the education has been primarily physical. The teaching for the girls now intensifies as they learn about the invisible spaces of life between the spokes. They learn their direct connection to Source. The boys now learn their direct connection to Gaia. The girls become spiritual leaders and reveal their highly respected shamanism. The men look after the earth and protect their families. Everyone learns the truth of who they are as Divine Creators. There is no gender in the god realm.

When the 7 year olds enter the wheel with their mothers, they are excitedly suggesting what they think each spoke represents. They end up calling the center of the wheel the central sun. Soon it is nicknamed the Great Central Sun and the children adorn it with flowers, or fruit or at night it is decorated with a fire or flames of some kind. It’s the center of all learning. It is the center of all truth.

One of the spokes was called Center Return. The children got it right away. They said, “Well, this is our Pleiadian Mother from the stars. There has to be a place where we go when we’re finished here”. You see the idea of the essence of a soul was right there with them. And they all said, “Yes. When we’re done here we return to the center, the Great Central Sun; where all things emanate from, the center, the beautiful center”. They were being introduced to reincarnation as ordinary and that there is no such thing as death. They memorized Center Return. All the spokes come and go from this, the center.

The second spoke was studied, Star Steering. The children were very excited about this too. They knew the Pleiadians came from the stars. And in order to get here they had to steer their way somehow. And they said this is going to be a spoke that eventually we’re going to be taught how to steer among the stars. “We can do what the mothers have done. Yes, We get it, We get that, Star Steering”.

Number 3 is Child life. What could that mean, Child Life? The children said, “This is name of the spoke given today, It’ll change tomorrow when we’re older. This is for us, we’re children. It’s the life that we have as a child. We’re going to be taught how that works”. Child Life. In reality this is the spoke of long life.

Number 4 Human God, They memorized these names. This was the first time they said, “There has to be a prophet, there has to be someone, something that is going to happen; a human becomes God. This is going to be for the future. We don’t understand it yet”.

The Mirror is the last spoke. Simple but not so simple! Can you see god reflected in another person. The Mirror, 5 spokes, odd names, memorized by the children. Then it started.

Slowly, methodically, simply and with elegance the Mothers would start teaching what the spokes really were. And the childlike ideas were enhanced slowly. Every session and every year got a little harder. The children got the idea only in the third year that the spokes worked both ways; center to the outside, outside to the center.

I, as an old soul, feel personally responsible for implementing a change in how our genders honor each other. Perhaps we can return to a new naturalness in our present day cultures. In these early days all the decisions that were important were women’s business. Women were expected to connect with Source and bring forth viable options and did so. The men may have still been active in “politics” but they relied on the Source connection of the women for direction. As we continue, society in general will start to see the balance and wisdom that is missing today. They will see the beauty of each person shining forth and know that their speaking out should be honored, especially if they are female. This is a new level of incredible balance and wisdom coming to both men and women. The Star Mothers taught this way before it became the gender issue that it is today.

There are several reasons why now is the time to look at each gender differently. Humanity is changing and the time is ripe for it, literally the energy field of the planet is starting to create it. A second reason is that remembrance is needed and necessary for society. It’s being done in other places, why not here? It is time we cleared the way to our Akasha and cleaned out whatever we have buried it under, from our prior lifetimes. And there is a literal shift of energy happening, of the masculine and feminine energy that is allowing society to see things in a way they’ve never been able to before.

Speaking out with compassion is becoming normal. I insist on normalcy. People are looking for ways to speak out the truth, that is bubbling up from inside them that makes total sense to them. Notice the silence that happens when people realize a truth. Imagine, the time when people will expect to see a woman stand up and be the leader of a group. We are starting to see this spiritual growth in places all over the planet. Society in general is starting to see the balance and wisdom that they never did before. Women will be honored. They’re the soft one. The one who knows about life. The one who’s given birth. The one who is connected first in a gentle way with the Creative Source. It makes total and complete sense.

References;
Retrieved from www.kryon.com
Trying to explain multidimensionality with linear words sometimes just turns what I am trying to say into more linear BS. Original mp3s can be found at Kryon.com; click to any page after home and go down to the bottom right and click on audios to find the free mp3s delineated by year.
Also https://amberwolfphd.com/