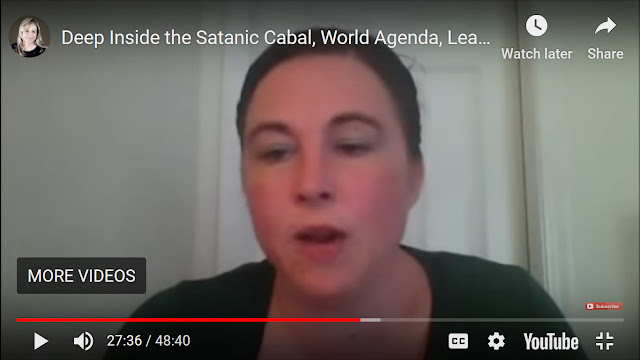 Sarah Westall was recently joined by Jessie Czebotar, who worked as a chaplain at the Veteran's Administration and who now works with organizations to find human traffickers and to free children from Satanic abuse.

She says she is uniquely qualified to do this because she was raised since earliest childhood to become a Mother of Darkness, a Satanic priestess at the highest level of the Illuminati, or as she calls it, "the System".

"Originally, it went by the name, 'the Brotherhood', so that's the authentic name for it...the illuminati, the Deep State, the Cabal - it's all the same thing."

She describes male and female hierarchies working side by side, with the women working mostly behind the scenes, "Getting their orders directly from Satan in the spiritual world and ... communicating those orders to the men, who are then the face front that everybody sees for the business and the company.

"They're the ones who are making things happen. The women do a lot of behind-the-scenes stuff, like I said. So, they'd be overseeing the programming, the grooming, the training.

"They are involved in the abuse and crimes against children, as well but they'd be the ones doing the training for the men, as they're children. They're going to be the ones raising them up, teaching them how to do their job, how to do the position how to live the Dual Life or programming them to live a Dual Life.

"All these people, they'll have a cover life that makes them look like a normal person and then they have their behind-the-scene life, which is their Luciferian worship...

"[Satan] intends to use people to usurp that Throne of God, so he can sit on it and that's what the agenda is and that's the agenda of the Mothers of Darkness, the New World Order - it's all the same agenda - to raise up the Antichrist to usurp the throne of God."

As Sarah says, "The most important thing to take from this interview is to further your understanding of how this Luciferian group operates and what they believe. Even if you do not believe any of this, they do.

"Without understanding what they believe and how they operate, it's impossible to understand why they do what they do and how to dismantle and neuter their grip on society."