Architects of the Plandemic 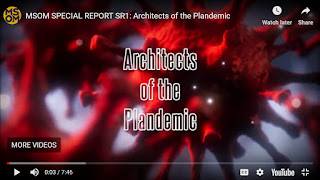 Architects of the Plandemic

This is a special report by James Grundvig called "Architects of the Plandemic", which premiered last Thursday on John Michael Chambers' new YouTube podcast, Making Sense of the Madness.

Please send donations for this valuable information to https://forbiddenknowledgetv.net/ and pass info on. We must wake up to this part of the story and not be living in the fear that is being forced upon the world.


Do you believe the coronavirus pandemic and global protests are unconnected?

Do you believe both events were organic and random in nature?

What if they were part of a master plan?

What if they were carried out with 9/11 attack precision in order to fast-track changes in laws to curb your freedom?

Was 9/11, shadowed by the anthrax scare, a template for the events that are unfolding today?


If yes, then who are the master planners?

Who are the architects of The Plan?

What is their agenda?


A look to the past reveals one plan had flowed out of the United Nations elite: The "Silent Weapons for Quiet Wars" doctrine. Written in 1954 and adopted at the first Bilderberg Group meeting the same year, it enshrined the globalists' agenda of social automation and engineering, with population control and reduction.

Hidden from public view until 1986, updates to The Plan were made by Klaus Schwab, founder of the World Economic Forum ('Forum') in 1982, and then the U.N.'s Gro Harlem Brundtland Commission produced "Report of the World Commission on Environment and Development: Our Common Future" in 1987.

By putting a green wrapping for the benefit of humankind on The Plan, it allowed the architects to go public with their aim to reshape the world. It also gave them the ability to mine public sentiment in order to change the opinions of the majority, while singling out and labeling the resistance.

The labels came in a variety of colors, from "anti-vaxxers" to "climate change denialists," but came from the same source. Still, that only took The Plan so far.


In order to gain control over the globe, the architects required other items to happen:


For the last critical piece to be achieved, it would require infiltration of the US, weakening and dumbing-down of its people, and the contraction of their rights.

The "Silent Weapons" the globalists deployed included water fluoridation, vaccinations, release of toxins, genetically-modified foods, and indoctrinating education. In using these tools, they have captured a large slice of the population. But to restrict freedom in the United States, major events would be needed to subjugate the rest of the people.

To bring The Plan to fruition in 2020 and oust the Trump Administration, the last blockade to their goal, a global event, natural in appearance had to occur. It happened with the novel coronavirus outbreak in China at the start of the year.

The timeline for the planning of this pandemic — "Plandemic" — began subtly a decade ago at the Opening Ceremonies of the 2012 Summer Olympics in London. 20 minutes into the show, some predictive programming for a future pandemic was staged. It included a coronavirus, hospital beds with sick children, and death lurking around.

Today, most people know about Event 201, the October 2019 wargaming of a coronavirus pandemic that killed 65 million virtual people. Produced by the Gates Foundation, John Hopkins University and the World Economic Forum, Event 201 further conditioned the public of a looming outbreak.

What is not known in 2018, the World Health Organization (WHO) launched a new unit in the Global Preparedness Monitoring Board (GPMB). Sitting at the head of the planning table were co-chair Gro Harlem Brundtland with board members Dr. Chris Elias, an executive at the Gates Foundation, Dr. Anthony Fauci, and Dr. George Fu Gao, the general-director of China’s CDC, among other socialist architects.

In September 2019, the GPMB produced its first annual report, "A World at Risk." On pages 10 and 39, under four Progress Indicators, the second indicator reads:

"The United Nations (including WHO) conducts at least two system-wide training and simulation exercises, including one for covering the deliberate release of a lethal respiratory pathogen."

Did the WHO conduct one of its "system-wide simulation exercises" last fall at Event 201? And did it "deliberately release a lethal respiratory pathogen" in Wuhan, China?

Last September, dozens of media outlets warned about an upcoming global pandemic based on the rick report the GPMB fed to them. Also September 18, Wuhan international airport drilled a live event where a person onboard an arriving flight was sick with a "new type of coronavirus."

With all of the predictions of doom, and the broken models that used false and suspect data as input—not clinical science—left the architects of the Plandemic on the wrong side of a crumbling narrative. They did achieve, however, sinking the global economy, destroying small businesses with lockdowns, while implementing new social control rules on wearing masks, contact tracing, and maintaining social distance from others.

Still, the architects have bigger plans to rob and restrict people’s freedoms with "immunity passports," remote vaccine tracking, and mandating COVID vaccines for all to take with the threat "if they want to return to society."

Realize The Plan isn't pro-health oriented as it's being sold.

Knowing the architects have lost the narrative on the first wave of coronavirus outbreak, they needed the protests, riots, and looting — the twelve days of U.S. Kristallnacht — to try to create a second wave of coronavirus fear and hysteria. That or another false flag event.

Behind the curtain of these linked events are the architects of change.

And boy, do they have plans for you.


scroll down to obtain video please