Will we activate our Energy Field for our health? 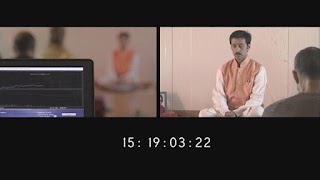 The event will be guided by Dr. Jayant K Bhadury, whose groundbreaking work features in “The 1 Field”, during which he demonstrated the distinct effect on the energy field of Ayala in Israel whereas he was in Varanasi, India. The effect was measured several times under the scientific supervision of Professor Kortkov.

The graph demonstrates an REG measuring, a device that was developed by the Global Consciousness project. Generally in ordinary circumstances the graph should be in the area of the light blue line; the more distant the graph gets from the center, this indicates awareness impact, intent, meditation. In one of Dr. Bhadury's workshops we see the immense effect of Yoga facilitated by Dr. Bhadury. The graph declined under the random probability, which is extremely rare.

A detailed explanation on this measuring method can be found in

On the International Day of Peace, Dr. Bhadury will guide thousands of participants worldwide from his home in Varanasi. We will measure the effect of the field with Prof. Kortkov's Sputnik in St. Petersburg, Russia, the Bio-Well of Krishna Madappa who will be in his home in Mexico and the REG that we will situate in Israel.

Dr. Jayant K Bhadury B.A.M.S has so many titles that we can hardly count:

He is Vice President of the Yoga Federation of India, Vice Chairman of the World Bhrigu Organization, a descendant of a well-known Yoga practitioners' dynasty, author of the book “Sermon about Yoga”, an Ayurvedic doctor that treats and teaches all over the world, an expert on Yoga and Indian medicine.

You're one of us, share this event so we could reach over 5000 participants and do our part in uniting the world.