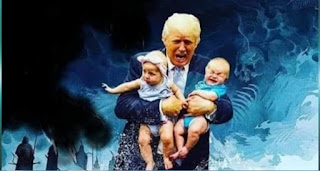 The PLAN is much larger than any person can imagine and has many roots connected to JFK JR. (Remember JFK JR faked his plane death so he could continue working behind the scenes to take down his father's killers}. He and his team initiated The SPECIAL FORCES -Who were created to protect the U.S. citizens as the U.S. Gov. (CENTRAL BANKS and INSURANCE COMPANIES and PHARMA) were creating a totalitarian world! Lots going on behind the scenes. Stay vigilant! This is way bigger than WWlll. It is a Galactic War. What you see is a pantomine as the bad guys are allowed to expose themselves, so they can eliminate themselves. We have won.  It just looks like s..t right now. Nothing we can do but watch the movie and stay out of the way and help each other. Sharing and caring is the new normal for humanity.